The Workshop will culminate in 3 performances between

Classes meet twice a week to write play.  (Usually the sessions are

3:30-5pm on Thursdays and 1-2:30pm on Saturdays, although we are somewhat flexible.) Once the play is written, the kids meet three times a week to rehearse and create the sets for the play.

-Arrangements can be made for low-income families.

The New World Children’s Theater began as The New World Puppet Theater at the North Water Street Gallery in Kent, Ohio, in January of 1993. Originally, it was comprised of home-school children.   Throughout the years , however, it has grown to include public-schooled childrenas well.  Eventually, the troupe outgrew the puppets and the ensemble became The New World Children’s Theater, which has produced 36 plays since 1994.  In addition to the emphasis on original playwriting, the company is dedicated to using recycled materials inthe construction of its sets and props.  This fosters an understanding of a sustainable planet as well as an understanding of how to work with limited resources.  The only requirement is an active imagination.

The New World Children’s Theatre is always looking for donations to support students from low income families as well as our our ongoing activities.

Donations are tax deductible and can be made to Standing Rock Cultural Arts,300 N. Water St., Suite H Kent, Ohio  44240.

Thank you for supporting the kids. 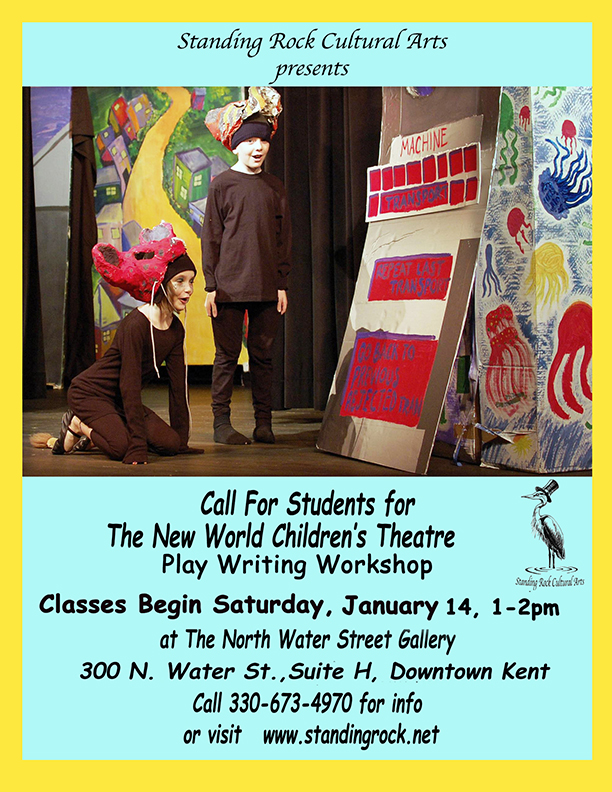