Armed with her sketchbook, Lila walks off to the world, convinced that she has the power to make it a better place. Sitting at a bar, hanging out at a park or walking down a street, Lila draws the lines that fill up the magic lost by those around her.

We had a good crowd at The Kent Stage last night who had the opportunity to watch 19 Award Winning Films from 2004 to 2022. When all the votes were counted, "Lila"

emerged as the clear "Best of The Best" People's Choice from all The Standing Rock International Short Film Festivals.

Sand painting film set to the music of Carole King’s song by the same name.

2nd Runner Up went to "Speed Dating", 2016, by Megan Artes from Chicago

Desperate to find the man of her dreams, sweet and plain Ava tries a last ditch effort,speed dating. But the absurd cast of characters she encounters makesher wonder if being single is not so bad after all.

ABOUT THE "BEST OF THE BEST" INTERNATIONAL SHORT FILM FESTIVAL:

-THE AUDIENCE WILL HAVE A CHANCE TO VOTE ON THE BEST OF THE BEST-FULL LIST OF FILMS TO BE FOUND AT WWW.STANDINGROCK.NET

ADMISSION:  $10 GENERAL.   $5 STUDENTS/SENIORS-TICKETS AVAILABLE AT THE DOOR OR ONLINE @ WWW.KENTSTAGE.ORG

Each year since 2004, Standing Rock Cultural Arts has invited the

international community to submit short films, 15 minutes or less, to be

screened for the public to enjoy and choose a favorite film.  In the

beginning, we were at the KIVA Auditorium, Kent State University, and we

had submissions in many different formats, super 8mm, 16mm, VHS, and

The program has changed a bit since then, moving to The Kent Stage

in 2005.  The digital medium of video has expanded to allow a wide range

of visual artists to create work, owing to accessible and affordable

software programs.   In 2023, there are many exciting experiments in the

world of video,  and Standing Rock Cultural Arts is honored to be able

As a way to commemorate our 20th year of producing the festival,

we've put together a program of all the winning films from each year. 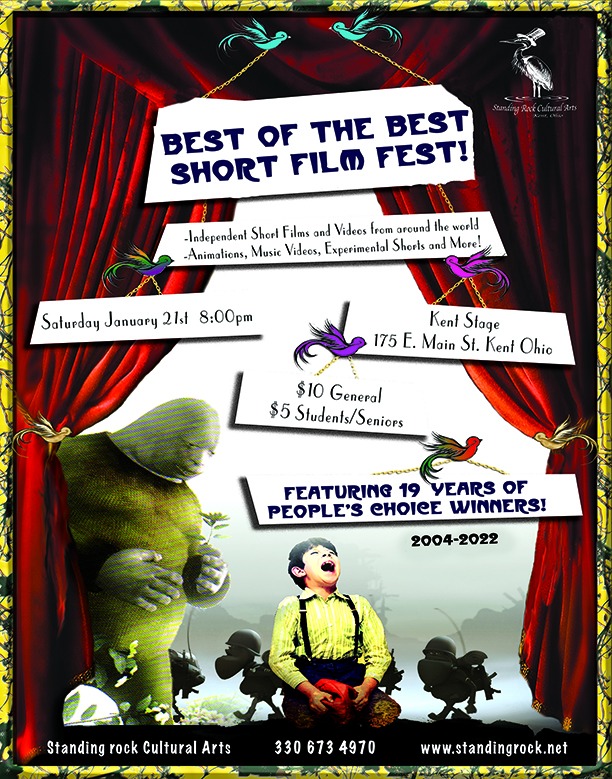