"Around the World" Music Series

Watch online at the following link:‍

Admission is free, but all donations (which will support future programs) will be gratefully accepted; suggested donation: $10-$20 (or whatever you can afford)

In this virtual concert, Gonzalez will introduce listeners to the rich and scintillating sounds of the Paraguayan harp, whose centuries-old tradition is a blend of Spanish and Guaraní cultural influences.

Mariano Gonzalez was born into a gaucho(cowboy) family in Buena Vista, southern Paraguay, where the beautiful plains seemed to stretch forever. He was raised among prolific family that maintained a multi-generational tradition of harpists.

Showing an interest in music since childhood, Gonzalez began learning the Paraguayan harp at the early age of 5, playing on an instrument he inherited from his father Fortuozo Gonzalez, which had previously belonged to his grandfather. There are now more than 20 harpists among Gonzalez's extended family, many of them performing professionally as well, such as his younger brother Gabriel Gonzalez.

After private tutoring at the Ministry of National Defense's Department of Art and Cultural Center in Asunción, Paraguay's capital city, Gonzalez began formal studies at the National Conservatory of Music in Asunción. His ability as a gifted harpist became evident when he joined a concert tour as amember of the group "The Messengers of Paraguay," which represented the music of his country at the World Music Festival in Tokyo, Japan.

Also at this time, Gonzalez performed the composition for Paraguayan harp entitled "Cascada"(Waterfall) by Digno Garcia, sponsored by NHK (Japan Broadcasting Corporation). He also took part in a UNESCO live recording in Tokyo,Japan.

Following this, he represented Paraguay at the Mediterranean World Festival in Lisbon and the Folk Festival In Cosquín, Argentina, and gave an extended European concert tour with performances in Switzerland, France, Italy, and Spain. He has also performed widely throughout the Middle East and East Asia,including a long tour with Las Estrellas del Paraguay, performing frequently on NHK TV in Japan.

Gonzalez made a major contribution when he succeeded in redesigning the Paraguayan harp in a way that allows for chromatic adjustments. This innovation enabled him to extend hisplaying into the jazz, popular, and semi-classical fields, in addition to his native South American repertoire. As a result, he was able to participate in the annual Festival Internacional de Jazz deAsunción, where this new, rich harmonic styling firmly established his reputation as a multi-idiom harpist.

Among his most special performances wasa 1999 performance with The Paraguayan Bohemians for the royal wedding ceremony of Prince Edward and Sophie Rhys-Jones in London,England. One of his next greatest achievements was his 2002performance at the Kennedy Center's Millennium Stage in Washington,D.C., where the audience of more than 2,000 awarded him three standing ovations. He was also invited to perform at the 9th Festival Guitarras del Mundo in Buenos Aires, Argentina.

Gonzalez performs regularly on radio and television, including appearances on the Dennis Bono Variety Hour in Las Vegas, Nevada. In 2004 he was featured as a member of the Bob Rozario Ensemble, recording "The Christmas Song" as sung by Dennis Bono and former Nevada Lieutenant Governn or Lorraine T. Hunt,with all proceeds benefiting the Foundation for Positively Kids.Since 2002 Gonzalez has performed regularly around the U.S. with the legendary entertainer Tony Orlando; in these performances he plays the traditional Paraguayan piece "Pájaro Campana" as wellas "Malagueña," dazzling the audience by playing two harps simultaneously.

● 2012 - Kennedy Center and Library of Congress, Washington, D.C. (representing the state of Nevada for the annual "Homegrown: Music of America" Folklife Program Associate in the Nevada Arts Council)

● 2014 - Awarded as Excellence In Entertainment, Musician of the Year Las Vegas, Nevada

Established in 2015, the "Around the World" Music Series is a concert series presenting outstanding musicians from diverse cultures in an intimate setting.

The series is an initiative of Standing Rock Cultural Arts, and is curated by ethnomusicologist David Badagnani.

The series is made possible by the support of Drs. Terry E. and Sara Stone Miller and the Ohio Arts Council. 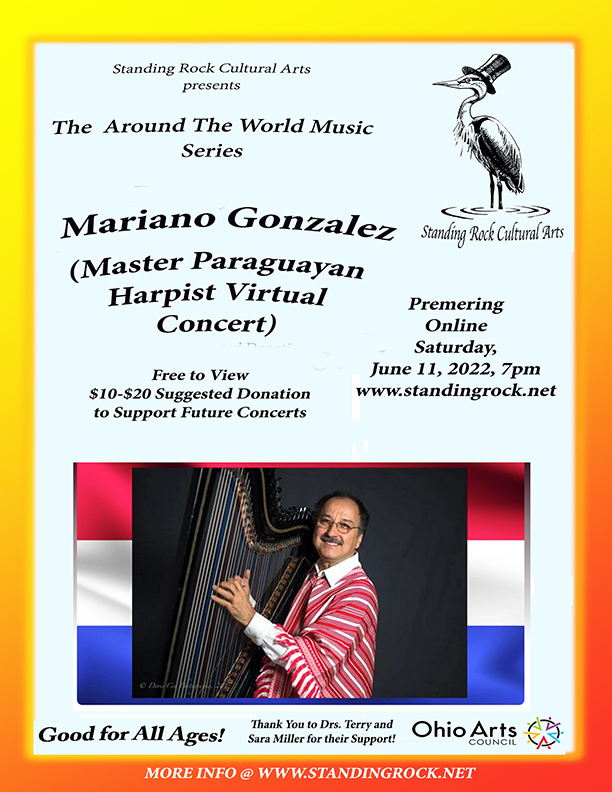