-- You purchase your ticket from our online store here.

-- You purchase your ticket from our online store here.

Since its formation in1996, Kenge Kenge (whose name means "a fusion of small, exhilarating instruments") has performed on five continents, atsuch venues and festivals as Lincoln Center, the Smithsonian FolklifeFestival, the American Folk Festival, WOMAD, WOMEX, the Rainforest World Music Festival, and NPR's "All Things Considered."

The 5-member ensemble uses such instruments as the orutu (1-string fiddle), nyatiti(8-string lyre), oporo (cow horn), and asili (end-blown flute), and avariety of traditional percussion instruments, along with joyful traditional singing and dancing.

Kenge Kenge will also present an interactive workshop at the same location at 2:00-4:00pm.on June 25 ($10 for the afternoon workshop, $5 suggested donation for the evening concert)

The group's visit represents a rare opportunity to learn more about the Luo people and their ancient and fascinating culture, many aspects of which are believed to derive from Ancient Egypt. The homeland of the Luo isKenya's westernmost region of Nyanza, which lies on the shores of Lake Victoria (the source of the Nile). Other famous people of Luo heritage include the late nyatiti player/vocalist Ayub Ogada, formerKenyan prime minister Raila Odinga, Oscar-winning actress Lupita Nyong'o, and former U.S. president Barack Obama. 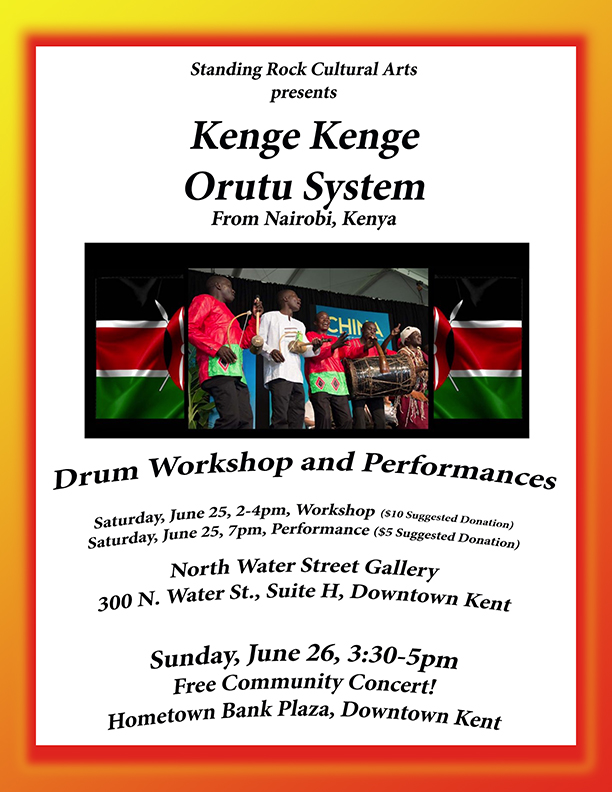